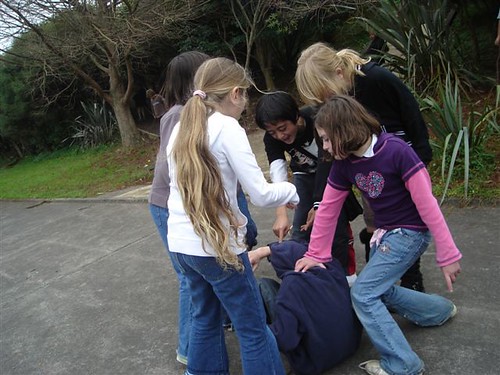 I decided to take one of my Toolbox for Change questions and post it directly on the blog so others can get a sense of  what Toolbox readers get to read.

I know that you know something about “men’s issues.”  I am a slightly effeminate man, who also happens to be short.  The problem is I have a hard time asserting myself in my personal and work relationships.  I tend to be bullied by work peers and dominated by females in personal relationships.  I have been relatively successful but do suspect that if I were more assertive I would be further along in my career.  Can you give me some empowerment tools that can help me assert myself?

Feeling you’re not a man is a belittling experience. The shame that is imparted on to you can be crippling. This stress coupled with trying figure out how not to be effeminate becomes a trap.

To escape this trap you need to first relax. Realize that your ‘effeminate traits’ are actually just qualities such as shyness, sensitivity, and physical build. By breaking the label down into its components you get to reframe how you see yourself. Also realize that every man has a feminine side. Grant you, it varies with each man, yet we all share the attributes you judge as bad.

Once you relax from the context of how you view your unique traits you can begin to stop fighting what will make you great. Next you can go on to asserting your feelings as you work towards achieving what you want. Your now limiting qualities can be your greatness. Expressing your individuality allows you to lead others to their uniqueness and consequently their greatness. Your courage transforms you and those you touch.

I grew up introverted, handicapped by my Asperger’s Syndrome, dyslexia and dyspraxia. I imagine if then was now some of my teasing would have included being called effeminate.  Whatever the words used to label your uniqueness, they hurt and trap you. As you surely found, attempting to prove the labels wrong doesn’t work. In fact, the bullies use those behaviors as reasons to taunt you more.

After attempting all obvious solutions I resorted to surrendering not to them but to myself. I allowed myself to feel not only the sadness produced from the bullying, but also the anger and fear. The fear had a stronger hold than I expected. Fear kept me frozen, first in denial of the impact of the shaming and then from responding to it.

The core to shifting this dilemma and acquiring your secret power is to feel the fear, sadness, shame and anger… as you move forward taking action.

Focus on what you want

Focusing on what you don’t want is only a coping mechanism for surviving the abuse. It is your head’s way to appease the pain. It is also much of what keeps you trapped in your cycle of abuse. It is the root of the passivity you speak about. Telling yourself for example that you aren’t effeminate becomes what in hypnosis is called an embedded command. Your unconscious doesn’t hear ‘no’, so that affirmation that you aren’t effeminate becomes an affirmation that you are.

Focus on being direct even if you aren’t sure of what it is or how to articulate it. Focus on your feelings and what you want. Let that awareness drive your actions, not your head, allow yourself to react, be less controlled.  I’m speaking about telling them how it hurts. Or it might be walking away and not taking it.

When you take a stand for yourself take it from a place of what you stand for as a man. Within every man is a purpose or calling. Often that calling is not discovered until later in life through the trials and tribulations of life.

You won’t immediately discover your purpose. You will discover that digging for that treasure is a lot more inspiring than hiding from others name calling. This journey is not only a journey of discovery; it is also a journey of learning. You are learning skills that you will need to use to achieve your purpose.

One skill you will learn is holding space for yourself and others. As you grow into accepting your uniqueness and all it quirks you strengthen your ability to hold your own space. That is a rare and powerful skill. When you can accept yourself in the face of others not accepting you no one will ever control you.

Bullying is not being assertive

Often we assume that a bully is strong. He is actually weak because he needs to rely on picking on another for his power. Over the years of working with men who in their youth were the bullies I learned they were some of the most insecure kids. Often ignored or abused at home by their parents or older siblings, they got their power from beating on others.

These kids and men will often back down when directly challenged. On several occasions I had to challenge someone who attempted to bully me. Their threatening language was just that, language. Behind their strong words was no substance of thought or conviction.

Being assertive or courageous is expressing what you want as you allow yourself to feel. A bully is someone who is in reaction to what he feels and certainly not allowing himself to feel his emotions.  Hiding behind his bravo is not true assertion. It is passing on his fears through picking on someone else he believes to be weaker.

You will also learn that men and women ultimately respect a man who is his own man. All our heroes are men or women who in spite of ridicule or abuse didn’t give up their vision. Gandhi, Martin Luther King or Nelson Mandela all endured for something bigger than themselves. You might not know what that is now. You will never know unless you start your journey.

Another quality of a mature man is he is less about what he says or others say he is. He is more about his actions; his virtuousness expresses itself through his accomplishments.

Letting others label you effeminate, passive or whatever they choose as a label is their choice. What you label yourself is your choice. To earn your new labels, begin your journey of discovery.

Photo by Jo via Compfight