The recent Newsweek article, Men’s Lib, speaks to the change society, and men in particular, is going through. As I a man I can say the world is changing around us. As a gender and as individuals we are being forced to keep up – I would say grow up. 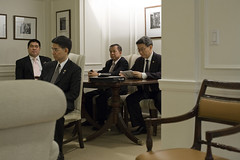 The article quotes a variety of statistics on how women are not only catching us but surpassing us in the workplace, and how we are taking a bigger

hit with the recession. We are being forced to change, as are institutions. Most of the growing jobs are in areas such as healthcare that have traditionally been dominated by women. It is tough for us as men to let go of our position and power.

But masculine expectations remain the same—even as there are fewer opportunities to fulfill them. As a result, says Joan C. Williams, author of Reshaping the Work-Family Debate: Why Men and Class Matter, “men have a choice: either feel inadequate or get a lot more creative.” What’s required, then, is not a reconnection with the past but a liberation from it; not a revival of the old role but an expansion of it. The End of Men isn’t nigh, nor is macho dead. But its definition should be broadened to include both Mr. T and Mr. Mom. It’s time, in other words, for a New Macho: a reimagining of what men should be expected to do in the two realms, home and work, that have always determined their worth.

As the article infers, there are upsides to the transformation that is happening. As men, we get to relax into not being in a static role modeled for us by previous generations. We get to be more of a parent who might have the opportunity to be the primary parent—without feeling inadequate or like a failure.

This could change sooner than you think. Recent polls show that majorities of Republicans (62 percent), Democrats (92 percent), and independents (71 percent) now support the idea of paid paternity leave. Big companies—especially those with lots of male workers, such as Texas Instruments, Sun Microsystems, and Ernst & Young—are beginning to offer at least two weeks of paid leave.

We also get to relax into collaborating with women at home and at work. Some of us don’t know what that could be like or what we are missing because we never had it. If only for economic reasons, men are being pushed into what women went though a few decades ago with women’s liberation. Men’s Lib is not fighting against women; it is fighting for our freedom from the stereotypical roles and expectations of what it is to be a man. It’s fighting for new ways to express ourselves as men that have been taboos and unavailable to us.

Please join me in our Freedom March. One of the things women have demonstrated  and what we learned from them is that fighting for more opportunities serves everyone. We are in this together.

This weekend I am at a conference with fellow leaders in the men’s movement to explore what’s next. In the spirit of co-creation, part of the conference involves women. Within the parameters  of this conference we are grappling with how we can be outside the box and  successfully collaborate with women on supporting men’s freedom. I don’t have an answer. I do have some questions.

What are your thoughts and questions around ‘Men’s Lib?’